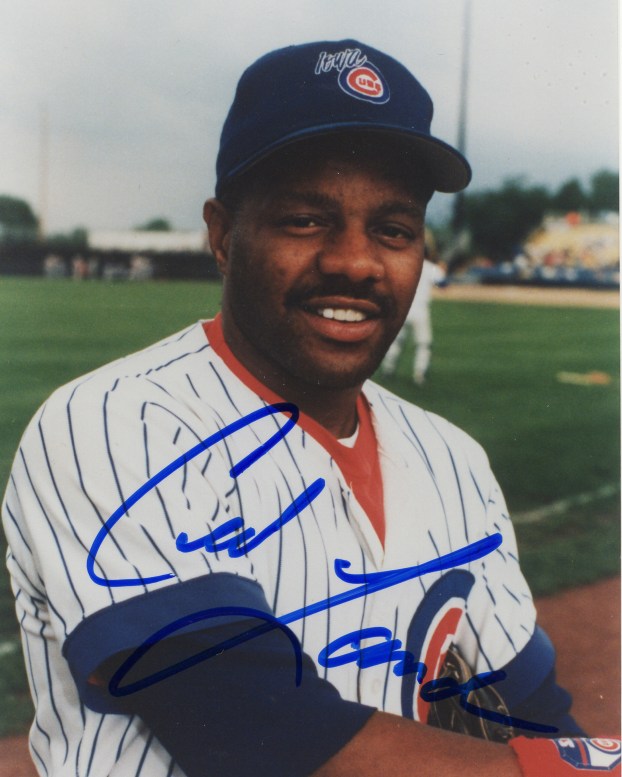 The Marengo County Sports Hall of Fame has named four new inductees who are slated to fill the Class of 2021. Those inductees are Cedric Bernard Landrum, Harold Little, Jesse Little, and Lester Mitchell. 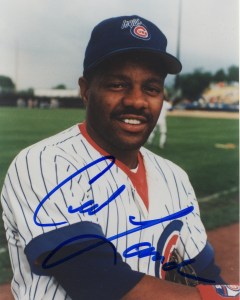 Cedric was born to Roosevelt and Johnnie Mae Landrum and had two brothers, Roosevelt and Michael and two sisters Beatrice and Glorian. Cedric played baseball and football at Sweet Water High School where he played on two baseball (1979, 1980) and two football (1978, 1979) state championship teams for Marengo County Sports Hall of Fame coach Nolan Atkins and graduated in 1981.

Cedric was a four-year baseball letterman for the University of North Alabama (UNA) from 1982-85 and became the first Lion baseball player to make it to the Major Leagues. While at UNA, the Sweet Water native set the NCAA Division II national record with 69 stolen bases in 1985 and helped UNA set a Division II national record for a team with 260 steals. He helped lead UNA to its first-ever Gulf South Conference baseball championship in 1984 and to its first-ever NCAA regional tournament the same year. He also led the way as UNA went 46-11-1 in 1985 and made another trip to the NCAA Division II regionals.

Cedric was selected All-Gulf South Conference, All-South Central Region and Second-Team NCAA Division II All-American in 1985. Cedric used his athletic ability to set numerous school records at UNA. The UNA single season records he set are five runs scored in a single game in 1985 (against the University of West Alabama), eight at bats in a game in 1985 (against Grand Valley State), most stolen bases 69, steal attempts 75, and most runs scored 79. In 1985 alone he led the team in hits, runs scored, home runs, triples, doubles and stolen bases. His career numbers at UNA are 540 at bats, 184 hits, 197 runs scored,108 runs batted in, 32 doubles, 12 triples, 101 bases on balls, 291 total bases and 163 games played.

Cedric began his pro career when he signed as a free agent with the Chicago Cubs in 1985. In his first five seasons in the minor leagues he averaged 50 stolen bases per season. He won the American Association AAA stolen base title with 46 in 1990 and was leading the league in thefts again in 1991 when he was called up to the Major Leagues by the Chicago Cubs. In all, he led four different minor leagues in steals and led the Cubs in steals his rookie season. He was later traded to the New York Mets and returned to the minor leagues in 1993. Cedric also served as a hitting instructor in the Montreal Expos organization with the club’s West Palm Beach in the Gulf Coast League.

Cedric was inducted into the University of North Alabama Hall of Fame in 1997. He is currently coaching baseball at Fort Worth Country Day School, coaches travel ball and also has a business where he gives baseball lessons. Cedric is married to Cynthia and has three children, Cedrina (CJ) who plays softball for the University of Georgia, Senterrio who played baseball and football at Duke, and Lonnie Woods. 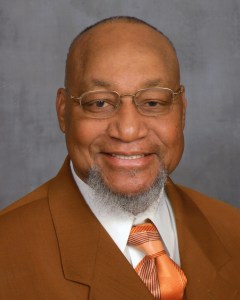 Harold Little played four years of football, basketball and baseball at G. P. Austin High School in Linden and graduated in 1971. After graduating in 1971, Harold had many scholarship offers and selected Albany State in Georgia to further his academic and athletic career.

In 1971, his first year at Albany State, Harold earned the nickname, “Alabama Slim.” He also earned the honor of being named All-Southern Intercollegiate Athletic Conference (SIAC) in football. Harold also made the track team competing in the javelin, and won the conference title. The team earned Southern Intercollegiate Athletic Conference (SIAC) Championship in track and field that year.

When asked how he became a track athlete competing in the javelin throw when his high school did not even have a track team, Harold responded, “Well, I got work study (pay from the university) and my job was to return the thrown javelins back to the athlete and one day I was tired of running them back and forth so I started throwing the javelins back to the guys and
before long I was throwing them farther than the track guys so the track coach put me on the team.”

In 1972, his sophomore year, the football team earned a 7-2-1 record and was ranked number two in the nation in Black Colleges. Again, Harold earned All-SIAC in football. He also played basketball that year and helped the team win the SIAC Championship in basketball. In track, he again won the conference title in the javelin and the team won the SIAC in track and field.

As a junior in 1973, Harold was awarded Athlete of the Year, Defensive Player of the Year and All-SIAC in football. He also received his highest honor in football as he was selected to the Kodak All-American Team. To this date, Harold is the only football player from Albany State to be selected for that prestigious award. He continued to play basketball and won the conference title again in the javelin and for the third consecutive year the track team won the SIAC
Championship.

His senior year, Harold was selected All-SIAC in football and track and won the conference title in javelin for the fourth consecutive year. Harold had a short term in the NFL with the Pittsburg Steelers and Buffalo Bills. He was also invited for a tryout in basketball with the L. A. Lakers. 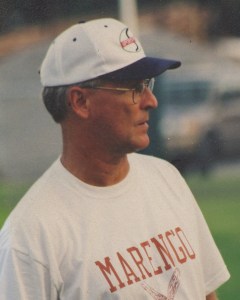 Jesse Little was born July 12, 1946, in Butler, Alabama to J. C. “Boots” and Lola Mae Hayes Little. He graduated from Sweet Water High School in 1964. While attending school there, he earned letters in football and baseball and finished as the valedictorian of his senior class. After high school, Jesse attended Auburn University for one year and transferred to Livingston University which later became the University of West Alabama. He received his BS degree in Biology with a minor in Chemistry in 1969. He returned to UWA in 1971 and completed his master’s degree in Science and Continuing Education with emphasis in Biology.

Jesse began his teaching career with Wilcox County Board of Education from 1969-72 teaching at the Pine Hill High School in Pine Hill, Alabama. In 1972, he began his tenure at Marengo Academy (MA) as a science teacher. As the head baseball coach in 1977, Jesse led Marengo Academy baseball team to the Alabama Independent School Association (AISA) 3A State Championship, the school’s first state championship. In 1981 as the head football coach, he led MA to the AISA 3A Football State Championship. Jesse received the honor of being named the 1982 AISA Coach of the Year. Two seasons later in 1983, Jesse again led the football team to the AISA 3A Football State Championship. Jesse remained at Marengo Academy teaching science, chemistry, physics and coaching until 1985 when he left to accept a job at James River Corporation.

Jesse returned to MA in 1992 as the head baseball and assistant football coach. In 1993 and 1995, MA won the AISA 3A Baseball State Championships and in 2000, under Jesse’s leadership, MA won the 2A State Baseball Championship. In 2001, Jesse was named (for the second time) the head football coach and Athletic Director. The benefits for that move came swiftly to MA as Jesse’s football teams won the 2001 and 2002 (back to back), AISA 2A State Football Championships.The honors for Jesse also came swiftly as the Tuscaloosa News and the Alabama Baseball Coaches Association named him the 2000 AISA Baseball Coach of the Year. In recognition for his successful leadership, Jesse was inducted into the 2013 AISA Hall of Fame. After 30 years of teaching, coaching, guiding and influencing two generations of students and athletes at Marengo Academy, Jesse retired in 2014.

Jesse and his wife, Teresa, live in Half Acre. They attend and are members of the Linden Presbyterian Church and Half Acre Community Church. They have three children, Leah Little Ford, Andy Ward and Susan Ward Ford. They have six grandchildren Alexia, Austin and Brandon Ford and Joey, Tucker and Sally Ward. 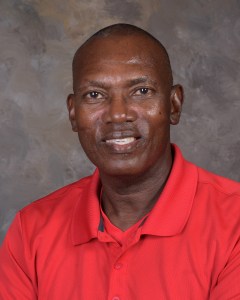 Lester Mitchell grew up in Demopolis the son of Mrs. Emma Mitchell and Mr. Charlie Lynch, who are both now deceased. Lester played youth league baseball from the ages of 9-12, and his athletic career could have ended there because there was no league for him to join after the age of 12. As it turns out, his career was just delayed. Lester has accomplished a lot for someone who never played baseball in high school. After graduating high school, he attended Selma University Junior College. While playing a pickup game of basketball one day, the head basketball coach invited him to try out for the team. Lester made the team and averaged seven points per game. When baseball season arrived, he walked on and was named the starting pitcher for his freshman and sophomore years. Lester amassed an overall record of 12-8 for both seasons going 6-4 each year. During his sophomore year for the Bulldogs, Mitchell had an ERA of 3.50 striking out 51 opposing batters and only walking 13.

After graduating from Selma University Junior College, Lester once again walked on to play baseball at Birmingham Southern College. Mitchell, the first black pitcher ever on a Birmingham Southern team, appeared in 14 games and pitched a total of 34.63 innings with an ERA of 2.07. By virtue of pulling three games out of the fire, he earned more saves than any other relief pitcher. In his 14 games, Lester stuck out 31 batters, gave up 21 walks, 29 hits and 10 runs. In his one start, he pitched a one-hitter against Manchester College of Indiana to give Southern a 3-1 win. The Panthers posted a 47-21-1 record that season, won the district playoffs in Birmingham and finished second to David Lipscomb College in area playoffs in Americus, Georgia.

After graduating from Birmingham Southern, Lester was invited to Hollywood, Florida to play semi-pro baseball. While there, he attended two professional baseball tryouts. The first with the Baltimore Orioles where he pitched three innings of an inter-squad game and gave up one hit and recorded 7 strikeouts.Two weeks later he attended the Milwaukee Brewers tryout and while warming up was asked if he would sign a professional contract but he would need to gain 35 pounds. In 1978, he was invited to travel to Managua, Nicaragua to play with their professional team where he pitched a complete game and won 3-2. Lester was sent to rookie ball in the
Pioneer League in Butte, Montana. After competing in Spring Training, Lester was released on the last day, ending his professional career.

Lester moved back to Demopolis and after a few years began a new sport, golf. Although he didn’t take up the game of golf until after the age of 40 and never had a lesson, he was good enough to compete on the Alabama Association Amateur Tour and the Emerald Gulf Coast Tour. In 2014, Lester and his partner Moses Ngirailab of Selma shot 10 under par and out of the 62- man teams finished tied for 9th place in the Alabama Golf Association 4-ball championship.

While living in Demopolis, Lester continued serving the public as a police officer for five years and as a teacher’s aide at Westside Elementary and U. S. Jones Middle School. In his spare time, he also played the organ and piano for several churches in the community and volunteered his time to play gospel music for the residents of the Woodhaven Manor Nursing Home, The Marengo Nursing Home and the Eutaw Nursing Home for over 20 years.

Lester Mitchell is married to Deborah and has four children, Leslie, Jocelyn, Lester Jr. and Marlana.

Marengo County Commision member Freddie Armstead turns over the gavel to Jason Windham who will serve as the new Chairman... read more