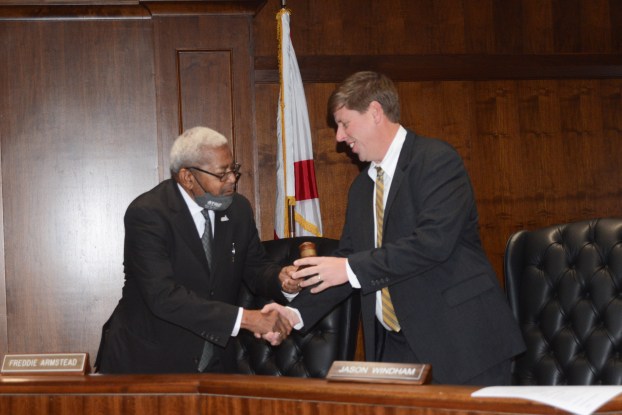 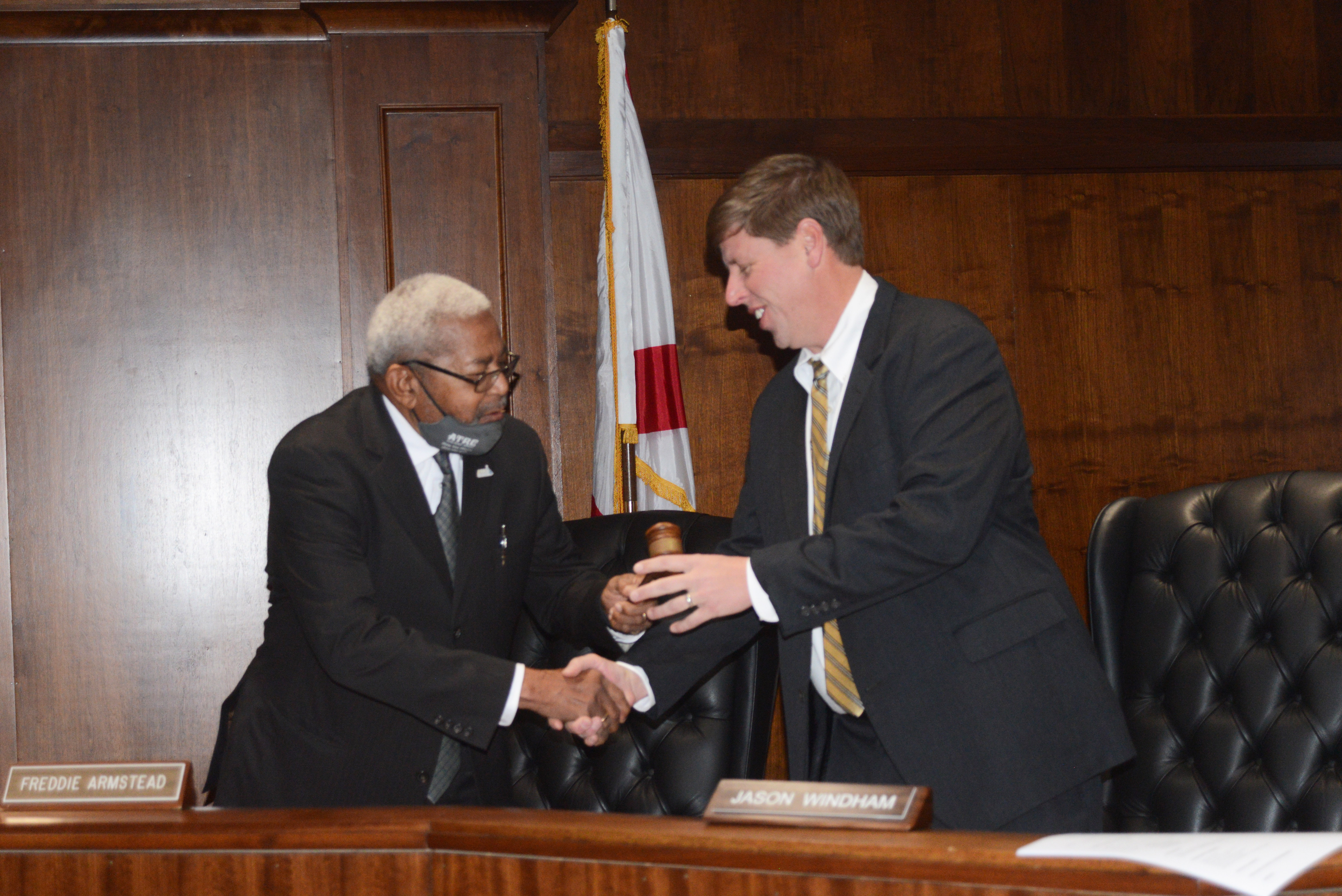 Marengo County Commision member Freddie Armstead turns over the gavel to Jason Windham who will serve as the new Chairman of the Commission.

The most recent Marengo County Commission meeting saw Commissioner Freddie Armstead pass on the role of Chairman to Commissioner Jason Windham. Each Commissioner serves a four-year term, and the chairman rotates each January.

“I am very proud to pass the gavel to a young man who is very concerned about the county and will carry the county on,” said Armstead.

Commissioners Terry Hinton and Calvin Martin expressed their appreciation for Armstead’s hard work, especially during the start of the coronavirus pandemic.

Bob Young of Frazer Lanier Company provided the council with the first bond updates of 2021. He reported that the interest rate environment for the county is in good shape. The current average rate on the bond is 1.6%. Young also noted that the commission had two audits in 2020 that resulted in A ratings for investors.

He also told the panel that his firm will go to the market on Wednesday, Jan. 13, to sell $3 million in bonds for county road work. He will report the results of the sale at the February commission meeting. 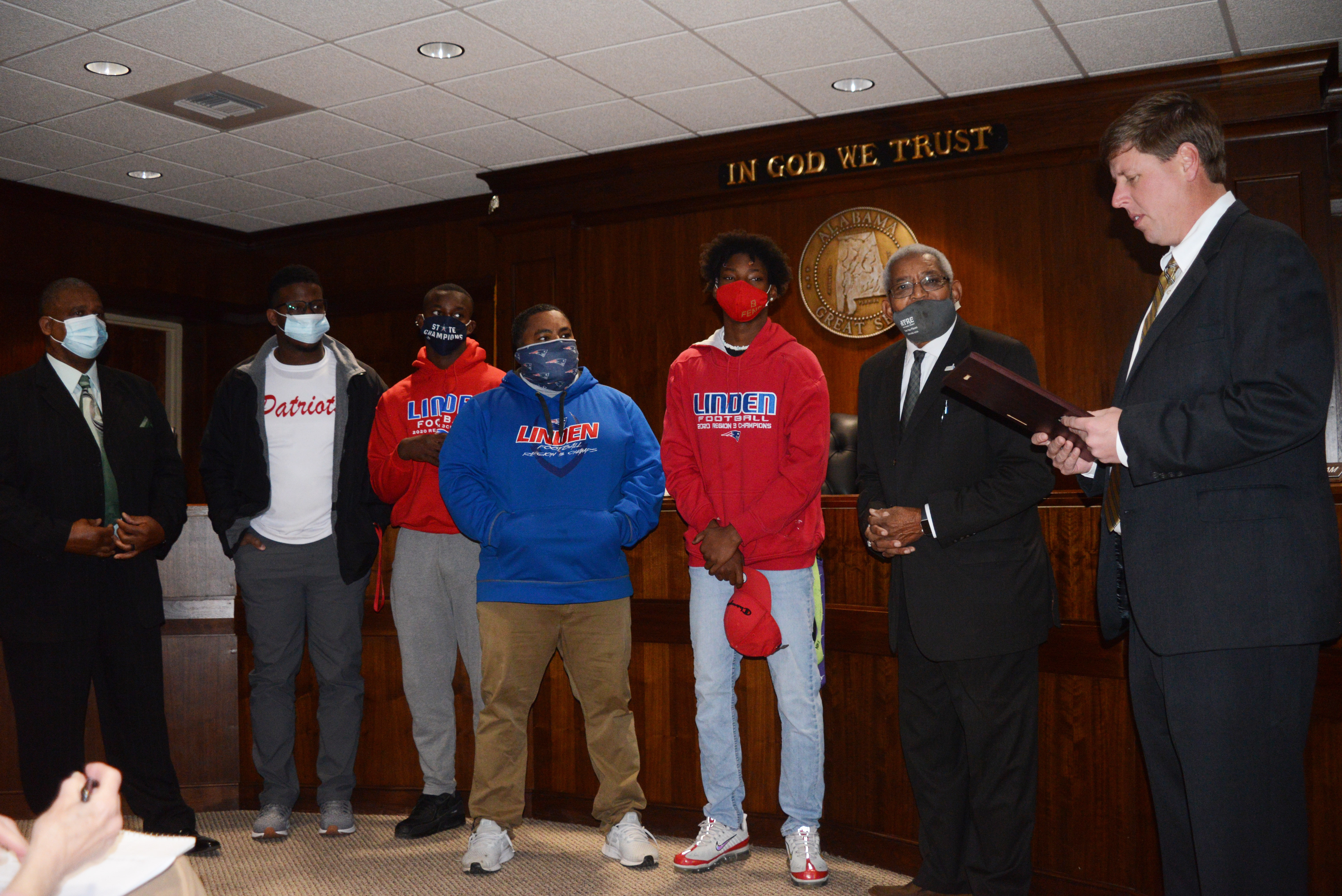 Linden football coach Travis Lockett and players receive a resolution from the Marengo County Commission for winning the 1A State Championship.

“I’ve only been in Marengo County for about fourteen years, and I know Linden’s been trying to get over the hump for a while now,” said Windham. “We’re proud of you guys for such a great season.”

The LHS football team completed an undefeated season at 15-0.

Sheriff Richard Bates reported that he is still checking prices for body cameras for area police officers. He is looking for cameras that are cheaper and more efficient than the current ones in use.

EMA director Kevin McKinney gave an update on damages from Hurricane Zeta. The EMA has been approved for Disaster Declarations to help in assisting recovery from the hurricane.

McKinney also reported on COVID-19 numbers in Marengo County. When the pandemic first settled in the county, the fourteen-day case count averaged around 35. When the mask ordinance went into effect, the case count was around 75. However, over the last few weeks, the numbers have been over 300. There were 207 new cases on Monday, Jan. 11.

McKinney said that Public Health is planning two clinics in the county for the next couple of weeks to provide the COVID-19 vaccination. The clinics will be open on Monday, Jan. 18, and Monday, Jan. 25, and will not be drive-through clinics. This is because of the 15-minute observation period after the vaccine is administered to monitor for allergic reactions. The clinics will be open to anyone who wants the vaccine, and no appointment is required, though it will be on a first-come, first-serve basis.

(This article originally appeared in the Wednesday, January 13 issue of the Demopolis Times.)

The phrase “third time’s the charm” proved true for the Linden Patriots. They dominated the Pickens County Tornadoes in the... read more