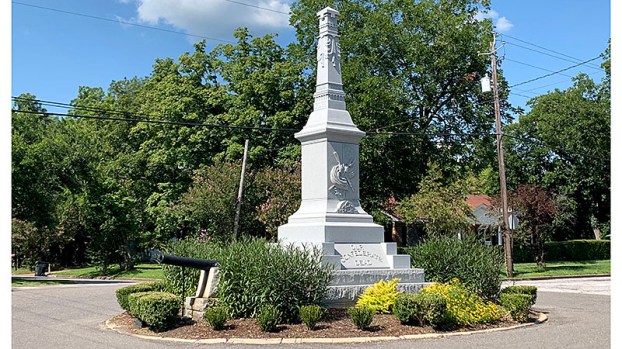 A Demopolis resident returned to the Demopolis City Council to ask if there are any plans to remove a monument from downtown, which led a councilman to state the current statue is not what was approved.

T’keisha Chandler, who said she also represents the New Order National Human Rights Organization, first appeared before the council in June requesting all Confederate monuments and flags be removed from the city. During Thursday’s meeting she asked if the city had made any plans regarding that request.

“If this is the City of the People, we have to include all the people,” Chandler said. “I’m begging you to place the monument in a place where those who want to view it can view it.”

She went on to ask the council if the changes made in 2017 were what they approved. The council had voted for changes to the monument after it was damaged when struck by a police vehicle in the summer of 2016. 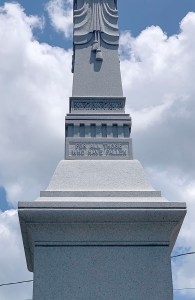 According to a bid approved by the city council in 2018, the new obelisk atop a downtown monument was to read, “For All Those Who Have Fallen.”

Mayor John Laney said the monument stands now as approved by the city council during a meeting on June 21, 2018. He advised Chandler that she is welcome to come up with a plan to present to the council. “In the end, it will be something the people of the city will have to decide,” he said.

District 1 Councilman Charles Jones countered stating he did not vote for the statue as it stands currently.

“It was supposed to be a monument for all who fought and ‘for all who have fallen’,” Jones said.

When the statue was damaged in 2016, a committee was established to look into how to proceed. That committee made a recommendation to the council to change the monument and to include some form of memoriam to veterans killed in all wars.

In April 2017, the council voted to replace the soldier that stood atop the monument. That measure passed 3-2 with Councilmembers Bill Meador and Cleveland Cole voting against it and the mayor abstaining.

Moving forward, during the June 21, 2018 meeting, the council approved bids from Doric South and Legacy Memorials for the repairs.

In the bid letter from the city, in the second section, it states the obelisk will have “an inscription which will be visible from the ground level stating ‘For All Those Who Have Fallen’” on its east and west sides. That inscription is visible on the obelisk that now stands at the intersection of N. Main Avenue and W. Capitol Street.

The base of the monument was repaired, but other changes were not specified in the bid.

District 3 Councilman Harris Nelson made a motion to approve the bid and District 2 Councilman Nathan Hardy seconded. The measure passed unanimously, 5-0. District 1 Councilman Charles Jones was serving as mayor pre-tem as Laney was absent. The minutes from the meeting can be viewed here: 062118 Demopolis Council Minutes

The council also approved repairs to the soldier and it is now on display inside the Marengo County History and Archive Museum.

No action was taken regarding the monument during Thursday’s meeting.

The Demopolis Public Library is selling boxes of books for $10 as they clear out some of their older collections.... read more