Henry Harrison of Demopolis celebrated his 100th birthday in January with three parties. One with family and friends, one with the Demopolis Rotary Club and one with his coffee group. 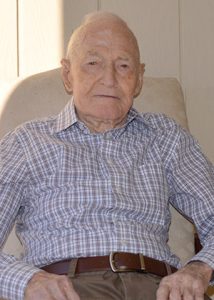 Harrison was born on Jan. 25 in 1919 and was raised in Arkansas. He eventually made his way down to Alabama, where he has lived since.

He was married to Velma Jean in 1950 until her death in 1980, and together they had three children: Sandra, James and Donna. Harrison remarried in 1986 to Helen Bradford and gained his stepson Henri. They also stayed married until Bradford’s death in 2014.

He joked that his favorite hobby today is playing basketball, a sport he participated in often growing up. Nowadays, he enjoys playing dominoes and meeting his friends once a week for coffee at Jack’s. He is also a member of the Friendship Club at First United Methodist Church and the Demopolis Rotary Club. Harrison has been a Rotarian since 1948, when he was inducted into the Linden Rotary Club three months after it was chartered.

Despite how much the world has changed in the past century, Harrison didn’t appear too impressed with any of it. Of smartphones, he simply commented “They’re alright. They’re fine.”

While he still has the spirit of his youth, Harrison said that turning 100 certainly “feels like 100.”

Sandra Buck, one of his daughters, said “I feel blessed to have him this long. It’s a blessing.”

(This article originally appeared in the Wednesday, February 6 issue of the Demopolis Times.)

The Demopolis Tigers’ got the better of county rival Linden High School  Friday, with both the boys’ and girls’ squads... read more