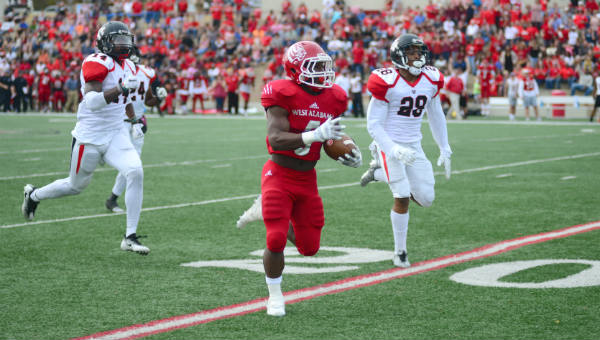 In a game that would all but clinch a playoff berth for the winner, the Valdosta State Blazers used untimely miscues by the West Alabama Tigers to claim a 37-22 victory in Tiger Stadium in Livingston on Nov. 5.

Turnovers played a huge role in the loss for West Alabama as the Blazers forced five turnovers from the Tigers. Turnovers are a statistic that UWA had been dominating in during the five-game winning streak.

“It was a big momentum swing there. The biggest thing is we never did anything to turn it back,” said UWA Head Coach Brett Gilliland. “Momentum hurts you if you let it and that’s why we have to make a play sometime after that to turn it back around.”

Despite the turnovers, UWA outgained the Blazers with 458 total yards of offense compared to 455 yards for VSU.

UWA quarterback Austin Grammer led the balanced attack with 232 yards passing on 21 of 37 passing attempts and a rushing touchdown. Rashaad Lee and Lakendric Thomas both went over the century mark on the ground as Lee totaled 101 yards and a touchdown on 8 carries while Thomas also rushed for 101 yards and a score on 18 carries.

Adam Robles finished 34 of 56 for 353 yards and three touchdowns to pace the VSU offense completing passes to 12 different receivers including nine for 108 yards to Damien Strange.

Valdosta State got on the board first in the back end of the first quarter when Gary Simon took a 48-yard punt by Zach Gaines 62-yards for a touchdown. Andrew Gray knocked in a PAT to give VSU a 7-0 lead with 5:06 on the clock.

After trading possessions and turnovers, UWA’s Lee broke free for a 64-yard touchdown run to put the Tigers on the board. However, Jordan Bennett missed his PAT and UWA trailed 7-6.

West Alabama took the lead in the second quarter by capping a nine-play, 60-yard drive with an 8-yard run by Lakendric Thomas. Grammer’s pass for a two-point try fell short but the Tigers held a 12-7 lead.

The visitors responded with 5:45 left in the half when Adam Robles and Xay Howard connected on a 9-yard touchdown as Valdosta took a 14-12 lead.

As time expired in the first half, Bennett connected on an 18-yard field goal to give UWA a 15-14 halftime lead.

However, the second half would be all Valdosta State as turnovers continued to plague the Tigers in crucial spots.

After the Blazers kicked a field goal to go up 17-15, VSU’s Stewart Spence forced CJ Savage to fumble, which was recovered by Spence at the UWA 4-yard line.

Robles connected with Anthony Ingram for an 18-yard score with 17 seconds left in the third quarter and then Robles found Joe Fortson to go up 37-15 with 9:14 left in the fourth quarter.

The Tigers did not go down with out a fight and proved that when Grammer capitalized on a short field setup by a blocked Gavin Wilson punt by Seth Knotts and powered in for a 10-yard touchdown run to finish the scoring with at 37-22 in favor of the Blazers.

With two conferences losses and three losses in region, UWA’s playoff hopes lie in the hands of the selection committee.

“I think one or two three-loss teams in the region are going to get in so we still have a shot because of what we’ve done in the middle part of this season,” said Gilliland. “With some of the three loss teams, we have a head to head (victory) against. That’s going to play out how it’s going to play out. I don’t think we’re 100 percent out of the picture, but I don’t we’re 100 percent in the picture. We’re just going to wait and see and focus on fixing what we just screwed up.”

The win for VSU was the 32nd in 36 meetings with the Tigers as the Blazers now lead that all-time series 32-4.

West Alabama will host the final home game of the season Saturday, Nov. 12 against Malone University. Kickoff is scheduled for 2 p.m. in Tiger Stadium.